Hackers Were Inside Citrix for Five Months

Networking software giant Citrix Systems says malicious hackers were inside its networks for five months between 2018 and 2019, making off with personal and financial data on company employees, contractors, interns, job candidates and their dependents. The disclosure comes almost a year after Citrix acknowledged that digital intruders had broken in by probing its employee accounts for weak passwords. 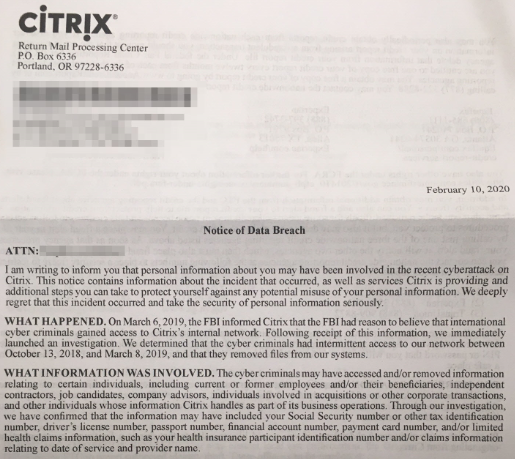 Citrix provides software used by hundreds of thousands of clients worldwide, including most of the Fortune 100 companies. It is perhaps best known for selling virtual private networking (VPN) software that lets users remotely access networks and computers over an encrypted connection.

In March 2019, the Federal Bureau of Investigation (FBI) alerted Citrix they had reason to believe cybercriminals had gained access to the company’s internal network. The FBI told Citrix the hackers likely got in using a technique called “password spraying,” a relatively crude but remarkably effective attack that attempts to access a large number of employee accounts (usernames/email addresses) using just a handful of common passwords.

In a statement released at the time, Citrix said it appeared hackers “may have accessed and downloaded business documents,” and that it was still working to identify what precisely was accessed or stolen.

But in a letter sent to affected individuals dated Feb. 10, 2020, Citrix disclosed additional details about the incident. According to the letter, the attackers “had intermittent access” to Citrix’s internal network between Oct. 13, 2018 and Mar. 8, 2019, and that there was no evidence that the cybercrooks still remain in the company’s systems.

It is unclear how many people received this letter, but the communication suggests Citrix is contacting a broad range of individuals who work or worked for the company at some point, as well as those who applied for jobs or internships there and people who may have received health or other benefits from the company by virtue of having a family member employed by the company.

Citrix’s letter was prompted by laws in virtually all U.S. states that require companies to notify affected consumers of any incident that jeopardizes their personal and financial data. While the notification does not specify whether the attackers stole proprietary data about the company’s software and internal operations, the intruders certainly had ample opportunity to access at least some of that information as well.

Shortly after Citrix initially disclosed the intrusion in March 2019, a little-known security company Resecurity claimed it had evidence Iranian hackers were responsible, had been in Citrix’s network for years, and had offloaded terabytes of data. Resecurity also presented evidence that it notified Citrix of the breach as early as Dec. 28, 2018, a claim Citrix initially denied but later acknowledged.

Iranian hackers recently have been blamed for hacking VPN servers around the world in a bid to plant backdoors in large corporate networks. A report released this week (PDF) by security firm ClearSky details how Iran’s government-backed hacking units have been busy exploiting security holes in popular VPN products from Citrix and a number of other software firms.

ClearSky says the attackers have focused on attacking VPN tools because they provide a long-lasting foothold at the targeted organizations, and frequently open the door to breaching additional companies through supply-chain attacks. The company says such tactics have allowed the Iranian hackers to gain persistent access to the networks of companies across a broad range of sectors, including IT, security, telecommunications, oil and gas, aviation, and government.

Among the VPN flaws available to attackers is a recently-patched vulnerability (CVE-2019-19781) in Citrix VPN servers dubbed “Shitrix” by some in the security community. The derisive nickname may have been chosen because while Citrix initially warned customers about the vulnerability in mid-December 2019, it didn’t start releasing patches to plug the holes until late January 2020 — roughly two weeks after attackers started using publicly released exploit code to break into vulnerable organizations.

How would your organization hold up to a password spraying attack? As the Citrix hack shows, if you don’t know you should probably check, and then act on the results accordingly. It’s a fair bet the bad guys are going to find out even if you don’t.

Crooks are constantly dreaming up new ways to use and conceal stolen credit card data. According to the U.S. Secret Service, the latest scheme involves stolen card information embedded in barcodes affixed to phony money network rewards cards. The scammers then pay for merchandise by instructing a cashier to scan the barcode and enter the expiration date and card security code. 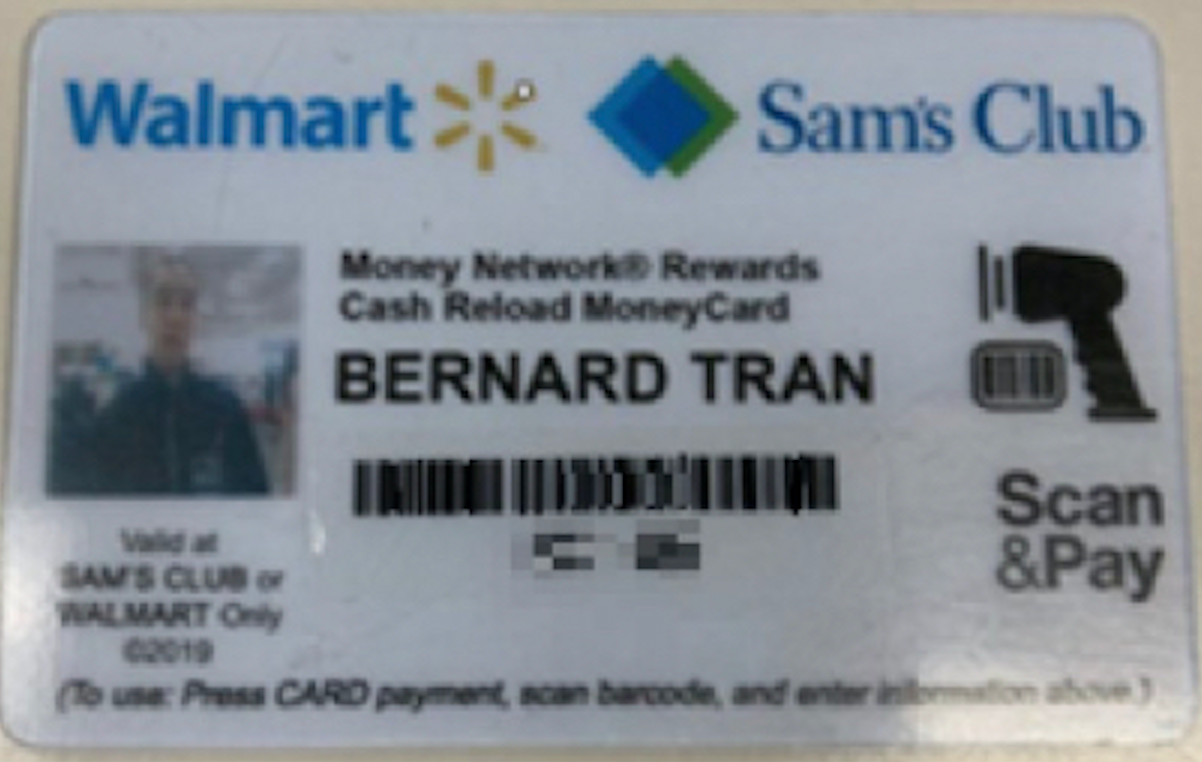 This phony reloadable rewards card conceals stolen credit card data written to a barcode. The barcode and other card data printed on the card have been obfuscated. Image: U.S. Secret Service.

Earlier this month, the Secret Service documented a recent fraud incident in Texas involving a counterfeit club membership card containing a barcode, and a card expiration date and CVV printed below the barcode.

“Located underneath the barcode are instructions to the cashier on the steps necessary to complete the transaction,” reads an alert the Secret Service sent to law enforcement agencies. “They instruct the cashier to select card payment, scan the barcode, then enter the expiration date and CVV. In this instance, the barcode was encoded with a VISA credit card number.”

The instructions on the phony rewards card are designed to make the cashier think it’s a payment alternative designed for use exclusively at Sam’s Club and WalMart stores. When the transaction goes through, it’s recorded as card-not-present purchase.

“This appears to be an evolution of the traditional card-not-present fraud, and early indications are linking this type of activity to criminal organizations of Asian descent,” the Secret Service memo observed.

“As a result of this emerging trend, instead of finding a large number of re-encoded credit cards during a search, a subject may only possess stickers or cards with barcodes that contain stolen card data,” the alert continues. “Additionally, the barcodes could be stored on the subject’s cell phone. If barcodes are discovered in the field, it could be beneficial to utilize a barcode scanning app to check the barcode for credit card data.”

Google has removed more than 500 extensions from the Chrome Web Store after they were found performing covert data exfiltration activities.

The United States’ ambassador to Germany said Sunday that President Donald Trump had threatened to cut off intelligence-sharing with countries that dealt with Chinese tech firm Huawei.