Joker’s Stash, by some accounts the largest underground shop for selling stolen credit card and identity data, says it’s closing up shop effective mid-February 2021. The announcement came on the heels of a turbulent year for the major cybercrime store, and just weeks after U.S. and European authorities seized a number of its servers. 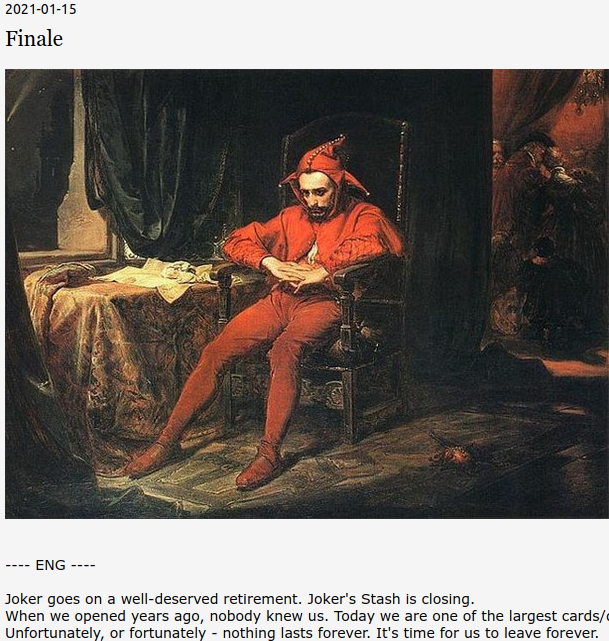 The Russian and English language carding store first opened in October 2014, and quickly became a major source of “dumps” — information stolen from compromised payment cards that thieves can buy and use to create physical counterfeit copies of the cards.

But 2020 turned out to be a tough year for Joker’s Stash. As cyber intelligence firm Intel 471 notes, the curator of the store announced in October that he’d contracted COVID-19, spending a week in the hospital. Around that time, Intel 471 says many of Joker’s loyal customers started complaining that the shop’s payment card data quality was increasingly poor.

“The condition impacted the site’s forums, inventory replenishments and other operations,” Intel 471 said. 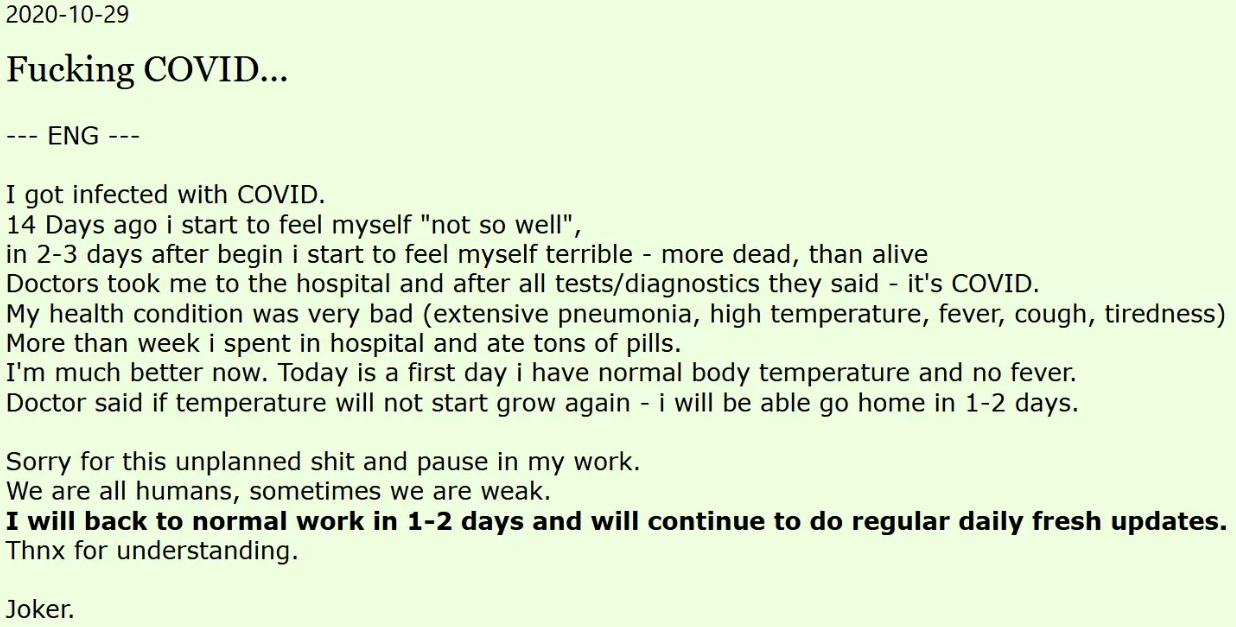 That COVID diagnosis may have affected the shop owner’s ability to maintain fresh and valid inventory on his site. Gemini Advisory, a New York City-based company that monitors underground carding shops, tracked a “severe decline” in the volume of compromised payment card accounts for sale on Joker’s Stash over the past six months.

“Joker’s Stash has received numerous user complaints alleging that card data validity is low, which even prompted the administrator to upload proof of validity through a card-testing service,” Gemini wrote in a blog post about the planned shutdown. 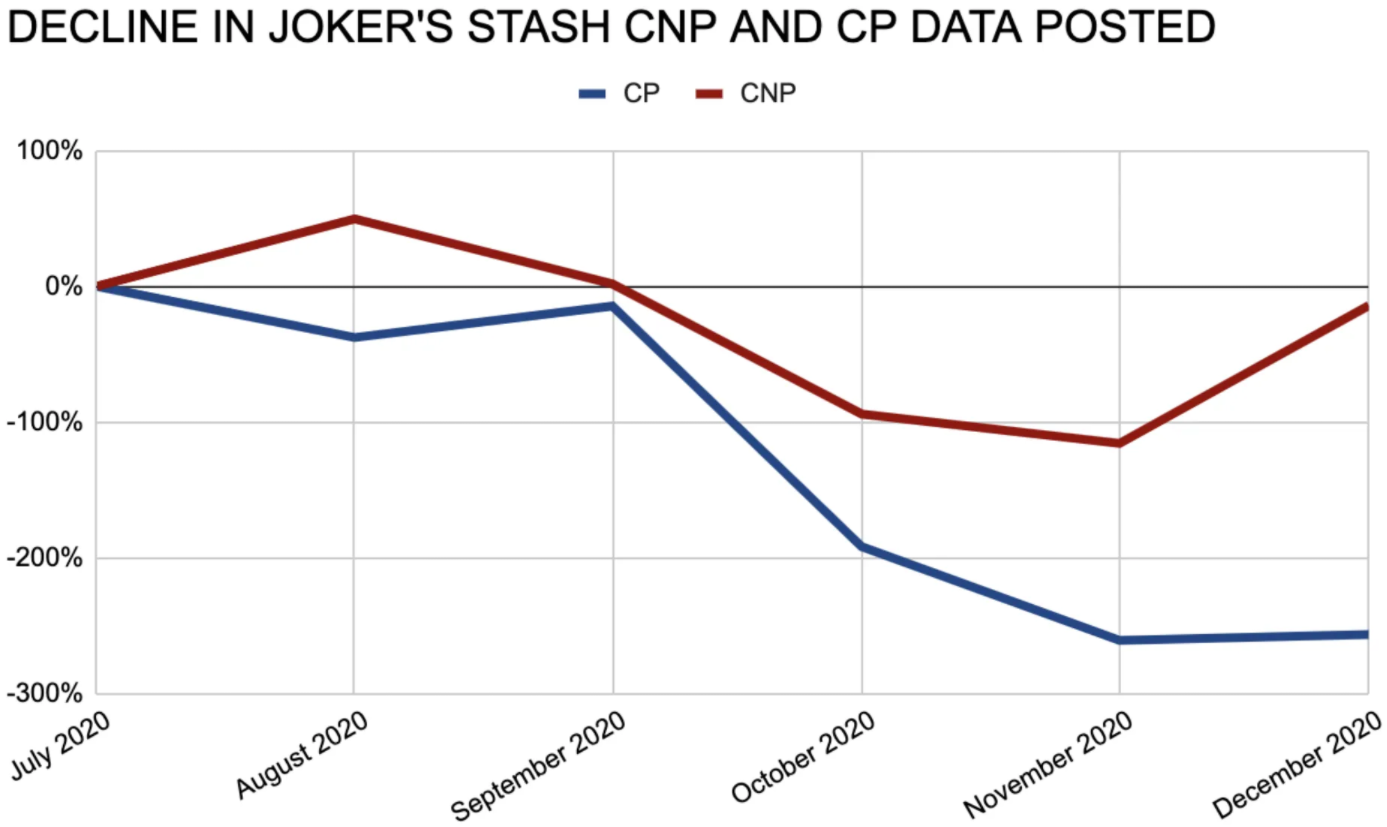 Then on Dec. 16, 2020, several of Joker’s long-held domains began displaying notices that the sites had been seized by the U.S. Department of Justice and Interpol. The crime shop quickly recovered, moving to new infrastructure and assuring the underground community that it would continue to operate normally.

Joker’s Stash routinely teased big breaches days or weeks in advance of selling payment card records stolen from those companies, and periodically linked to this site and other media outlets as proof of his shop’s prowess and authenticity.

Like many other top cybercrime bazaars, Joker’s Stash was a frequent target of phishers looking to rip off unwary or unsophisticated thieves. In 2018, KrebsOnSecurity detailed a vast network of fake Joker’s Stash sites set up to steal login credentials and bitcoin. The phony sites all traced back to the owners of a Pakistani web site design firm. Many of those fake sites are still active (e.g. jokersstash[.]su).

As noted here in 2016, Joker’s Stash attracted an impressive number of customers who kept five and six-digit balances at the shop, and who were granted early access to new breaches as well as steep discounts for bulk buys. Those “partner” customers will be given the opportunity to cash out their accounts. But the majority of Stash customers do not enjoy this status, and will have to spend their balances by Feb. 15 or forfeit those funds. 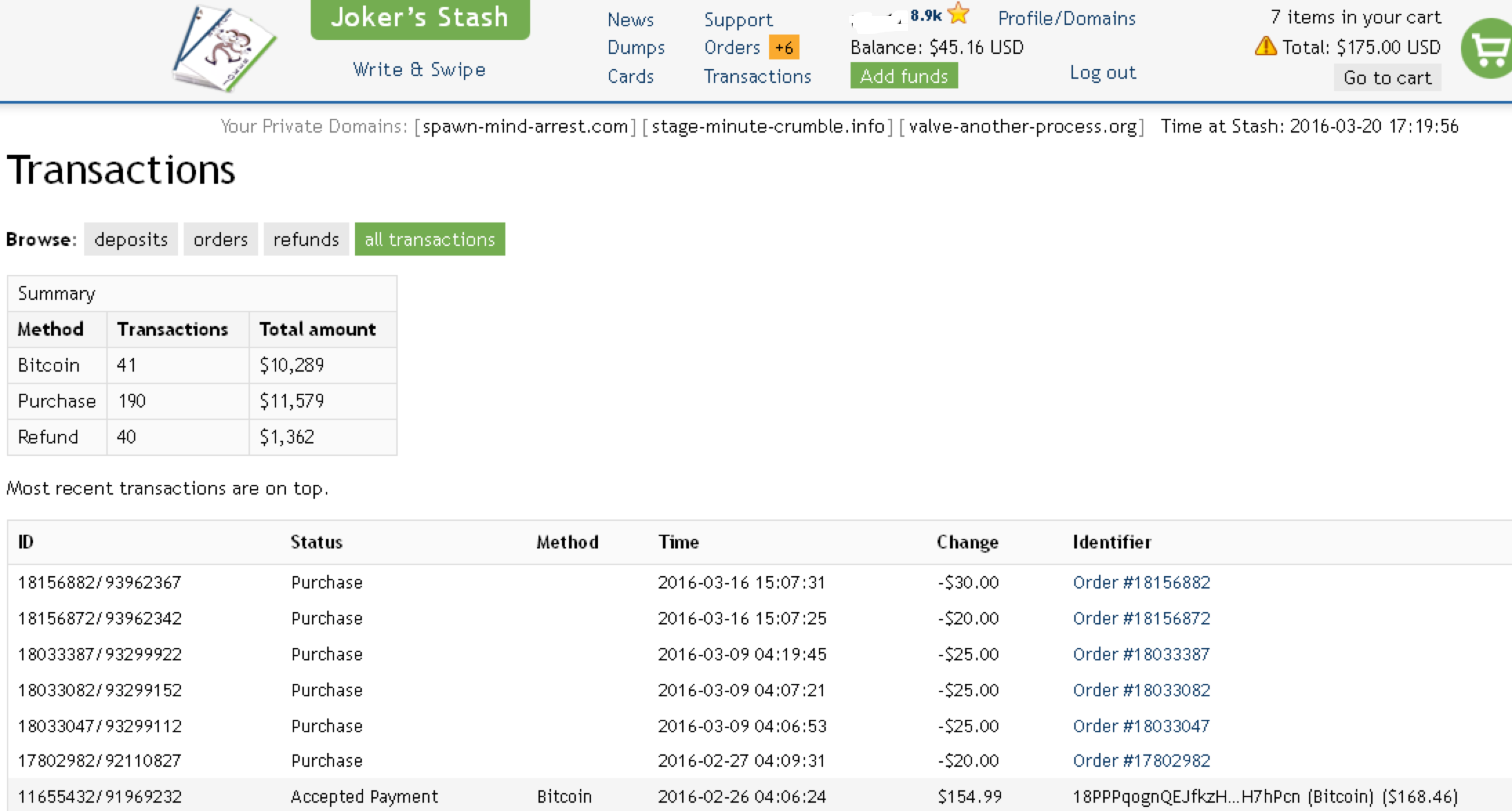 The dashboard for a Joker’s Stash customer who’s spent over $10,000 buying stolen credit cards from the site.

Gemini said another event that may have contributed to this threat actor shutting down their marketplace is the recent spike in the value of Bitcoin. A year ago, one bitcoin was worth about $9,000. Today a single bitcoin is valued at more than $35,000.

“JokerStash was an early advocate of Bitcoin and claims to keep all proceeds in this cryptocurrency,” Gemini observed in a blog post. “This actor was already likely to be among the wealthiest cybercriminals, and the spike may have multiplied their fortune, earning them enough money to retire. However, the true reason behind this shutdown remains unclear.”

If the bitcoin price theory holds, that would be fairly rich considering the parting lines in the closure notice posted to Joker’s Stash.

“We are also want to wish all young and mature ones cyber-gangsters not to lose themselves in the pursuit of easy money,” the site administrator(s) advised. “Remember, that even all the money in the world will never make you happy and that all the most truly valuable things in this life are free.”

Regardless, the impending shutdown is unlikely to have much of an impact on the overall underground carding industry, Gemini notes.

“Given Joker’s Stash’s high profile, it relied on a robust network of criminal vendors who offered their stolen records on this marketplace, among others,” the company wrote. “Gemini assesses with a high level of confidence that these vendors are very likely to fully transition to other large, top-tier dark web marketplaces.”